I have always had a feeling that I was being hard done by when it came to Shrove Tuesday. I had been aware for many years of the Carnival in Rio de Janeiro and Mardis Gras in New Orleans which celebrated the last day before lent in a slightly more exuberant way than eating a pancake that my mother had often stuck to the ceiling in a pretty poor display of tossing or had peeled off the floor, made a token effort to scrape off the dog hairs now attached to it, and tell me with no authority whatsoever “that won’t kill you, get it down you”.

When I first moved to Totana I was blissfully unaware that in this small town of some 30,000 people they too host an amazing celebration which goes largely unseen by outsiders eyes. Groups of people called Peñas come together early in the New Year and start to rehearse with absolute dedication for their performances. The rehearsals are frequent and intensive and the hard work can be seen in the level of their performances. The eagle eyed among you will notice that I have used the plural form of performance. There’s a reason for that, in Totana the Carnival happens twice. Once on the Saturday before Shrove Tuesday and then again the following Saturday when they invite the best of the best Peñas from surrounding towns to come and join the party.

he Peñas differ in size and in the level of seriousness with some being a mere handful of characters on a small float to dance troupes of nearly 200. There is a cross section of ages and genders, the men are heavily involved in every area of the Carnival, and there is also a specific childrens Carnival on the Sunday. The larger Peñas will often tell a story through their dance and competition to be the best Peña is fierce. Costumes, hair designs and make-up are elaborate. Parents have no objections to spending up to €1500 on an outfit that will only be worn for one years Carnival. Each Peña has it’s own floats and vehicles and the music which accompanies the troupes is loud and infectious.

So, let’s get on to the first day of Carnival and try to imagine that the whole town either seems to be taking part in the show or watching it. Viewing points are at a premium, it’s quite normal to see people arriving on the route with their sofa. Did you read that ? They bring their bloody sofa with them !! Well, they usually have the last laugh, if you stand in one spot the whole procession will take about 4 hours to go past you. This type of commitment to watching an event generally requires a drink or two and the bars are busy and incredibly good natured. This town knows how to party and, more importantly, it knows how to behave. There is a token local police car at the head of the procession and then after that there is no visible presence whatsoever. It seems unbelievable but it’s true, the whole event needs absolutely no policing and everywhere you look for the whole day there are people with a drink in their hand.

If you have never been to see Carnival then you’re in for a real treat. For many, myself included, it’s one of the best weekends of the year. Now I’m not going to tell you where I watch it from but let’s just say the plaza is a fantastic spot to take everything in. Bring chairs if you want to and above all else bring a happy heart and watch a small town celebrate like there’s no tomorrow………. anyone for pancakes? 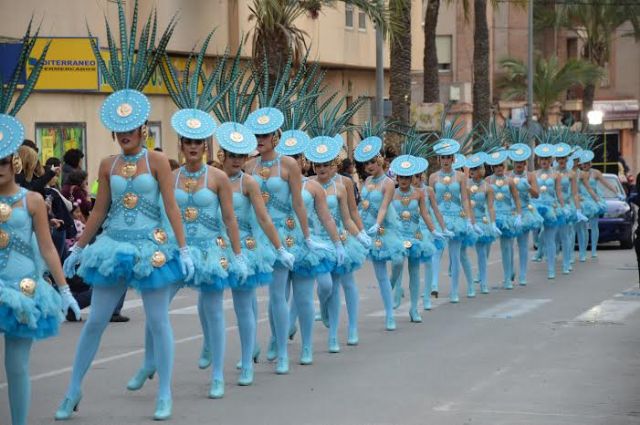 If you want to comment on this news to the administrators of Totana.net, fill out the form below:

The owner of the personal data, collected in this form, expressly authorizes Alamo Networks, S.L. to treat said data in a computerized way and to be able to incorporate it into your database. The user may exercise the rights of access, rectification, cancellation and opposition of their personal data, in the terms established by the LOPD, at the address set in C / Alamo 8, 30850, Totana (Murcia). For your convenience you can also exercise your rights by email at the address info@totana.net

This website uses cookies to facilitate and improve navigation. If you continue browsing, we consider that you accept its use. More information